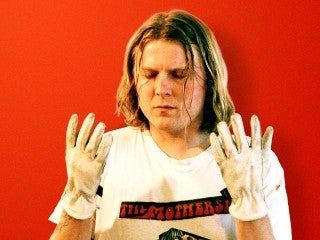 Ticket Price: $30 advanced / $32 day of show / $53 reserved loft seating (loft seating is available over the phone or in person at our box office)

Ty Segall and the Freedom Band's show policy requires guests to be fully vaccinated against COVID-19. Proof of vaccination may be given in the form of a paper copy or digital image of a guest’s vaccine card.

The band also requests that audience members wear a mask at all times while not eating or drinking.

Negative PCR tests will not be accepted at this time.

Ty Segall is an American musician and songwriter, based in Los Angeles, California. A multi-instrumentalist, Segall is a vocalist, guitarist and drummer. He has released eight solo albums and is a member of the bands The Traditional Fools, Epsilons, Party Fowl, Sic Alps, Fuzz, and The Perverts.Segall began his recording career as a part-time musician in various underground bands in Orange County and the San Francisco Bay Area, before beginning a solo career in 2008. Segall's first solo release was the cassette Horn The Unicorn released on the Wizard Mountain label (later re-released by HBSP-2X on vinyl record). Around the same time, Wizard Mountain also released a split cassette featuring Segall and the band Superstitions entitled Halfnonagon.

While working through some closet cluttter during lockdown cleaning, Kevin Boog, aka Oogbogo, excavated a box of tapes. These four songs, recalled from scattered time periods, share four different outcomes but one similar vibe – a good vibe to send to the world right now.

Fans of the debut Oogboogo EP that came out a million years ago in January 2020 will hear a different sound here – stoned, but from a different strain this time around. Trippier, less wired. Daytime, rather than nighttime trips. More melody, softer rhythms. This is water music, sunbaked and windburnt – pervading ubiquity whether flowing forward, standing becalmed or trickling toward the unknown. Reaching beyond our static-infused atmosphere to the skies. A feeling expanding in the chest in the open air.
Kevin tell us that “sounds of Live Dead, M. Yonkers, and Television Personalities ruled my world at the time I recorded this stuff,” and above the waves of hiss that rise up gently, waxing to high tide, we can hear traces and echoes, light reverberations of these wildly varied inspirations mixed together in Kevin’s own brew, corked loosely and sent out - a message in a bottle come across the water to us in our time of need.

Oogbogo EP 2 has been mixed and mastered by GOD? head man himself, Mr. T.G. Segall. 100% of proceeds will benefit Covid-19 relief.