Tommy Castro and the Painkillers 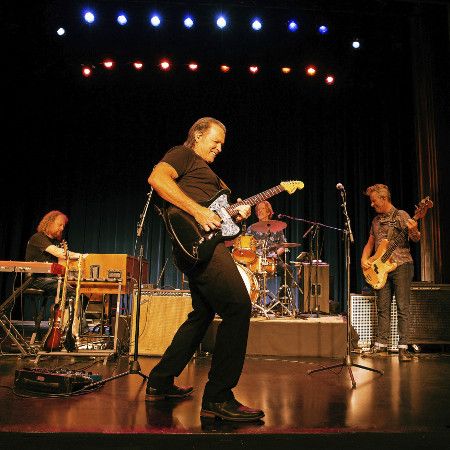 Tommy Castro and the Painkillers

Castro brings his electrifying blues guitar skills to the stage accompanied by a voice that “is a soulful and versatile blue-collar growl."

This event has been rescheduled from January 10 2021. All ticket purchased from the January 10th date will be honored.

Ticket Price: $24 advanced / $27 day of show / $42 reserved loft seating (loft seating is available over the phone or in person at our box office)

Tommy Castro and The Painkillers

Blazing soul-blues rocker Tommy Castro’s musical roots run deep. As he unleashes his high-energy music to fans all over the world, Castro is inspired by the sounds he absorbed while coming of age on the rough and tumble side of San Jose, California. During the late 1960s and early 1970s, this was Castro’s home turf—his stomping ground. It was a place where the street-tough Mexican Americans and the counter-culture hippies came together to drink, smoke, laugh, party and listen to tunes—the hippies with their blues and rock, the Mexicans with their soul music. Mixing the blues-rock he loved and the soul music he heard blasting out from the lowriders cruising the streets, along with the socially conscious message songs of the day, Tommy’s own sound was born. He honed his guitar playing to a razor’s edge on the city’s competitive bar scene, where he learned how to capture an audience with his intensely passionate vocals, stellar musicianship and dynamic performances. Almost every major rock and soul act, from Ike & Tina Turner to Janis Joplin to Elvin Bishop to Taj Mahal, toured through the area, and Castro was at almost every show. He saw John Lee Hooker, Albert King and Buddy Guy & Junior Wells at the same local blues bar, JJ’s, where he often jammed, dreaming of one day busting out.

Over the course of his career, Tommy Castro’s San Jose DNA has always inspired his music, whether he’s squeezing out the deepest blues or the funkiest soul grooves. He and The Painkillers—bassist Randy McDonald, keyboardist Michael Emerson and drummer Bowen Brown—have played hundreds of shows to thousands of music lovers, always leaving his audiences screaming for more. All of his albums are filled with original blues, soul and West Coast rock, each song showing a slightly different side of Castro’s multifaceted musical personality. Billboard says the band plays “irresistible contemporary blues-rock” with “street-level grit and soul.”

On his new album, Stompin’ Ground, Tommy Castro opens windows into both his past and his always-evolving musical future. Produced by Castro and guitar wunderkind Kid Andersen and recorded at Andersen’s soon-to-be legendary Greaseland Studio in San Jose, Stompin’ Ground finds Castro letting loose on a set of 12 tracks featuring six originals and new versions of songs he learned and played as a young up-and-comer. He is simultaneously looking back with autobiographical originals and cover songs that inspired him, while forging a forward trail with modern lyrics atop blistering blues-rock. With The Painkillers firing on all cylinders behind him, Castro lays it all on the line from the opening notes of Nonchalant to the final, introspective Live Every Day. From the autobiographical My Old Neighborhood to the socially aware Enough Is Enough and Fear is The Enemy to versions of Elvin Bishop’s Rock Bottom and Taj Majal’s Further On Down The Road (two of his favorite songs from his earliest heroes), Stompin’ Ground is pure musical pleasure. “As soon as we started cutting,” Castro says, “we knew we were onto something.”

In addition to the The Painkillers, Castro’s friends Charlie Musselwhite (harp and vocals on Live Every Day), Mike Zito (guitar and vocals on Rock Bottom), Danielle Nicole (vocals on Soul Shake) and Los Lobos’ David Hidalgo (guitar and vocals on Them Changes) add their talents to Stompin’ Ground. “I heard each one of my friends’ contributions to these songs in my head as I was working on them. Happily, when I reached out and actually asked, everyone said yes.”

Born in San Jose, California in 1955, Tommy Castro first picked up a guitar at age 10. He fell under the spell of Eric Clapton, Elvin Bishop, Taj Mahal, Mike Bloomfield and other blues-rockers. As he got older, Castro discovered the bedrock blues of Muddy Waters, B.B. King, Freddie King, Buddy Guy, Elmore James and the deep-rooted soul of singers like Ray Charles, Wilson Pickett and James Brown. By his teenage years, he was regularly heading to San Francisco to see his favorite artists at legendary venues like The Fillmore West and Winterland. He began playing in a variety of Bay Area blues and soul bands in his early 20s, making a name for himself as a hotter than hot live artist. In 1985 he became lead singer and guitarist for the locally popular blues band NiteCry, and began gigging regularly throughout Northern California.

Castro joined Warner Brothers’ artists The Dynatones in the late 1980s, gigging all over the country. He formed the first Tommy Castro Band in 1991, releasing his debut album in 1996 on Blind Pig. He hit the road hard, picking up new followers everywhere he went. In the mid-1990s The Tommy Castro Band served as the house band for three seasons on NBC Television’s Comedy Showcase (airing right after Saturday Night Live), bringing him in front of millions of viewers every week. During the 1990s and into the 2000s, Castro released a series of critically acclaimed CDs for Blind Pig, Telarc and 33rd Street Records, as well as one on his own Heart And Soul label.

Castro joined Alligator Records in 2009, releasing Hard Believer to massive acclaim. He won four of his six career Blues Music Awards including the coveted B.B. King Entertainer Of The Year Award (the very highest award a blues performer can receive). His song Hard Believer took first place in the blues category of the International Songwriting Competition. His next release, 2011’s Tommy Castro Presents The Legendary Rhythm & Blues Revue–Live!, was a boisterous and searing collection of highlights from a series of live performances anchored by Castro and an all-star collection of blues giants, including Rick Estrin, Michael “Iron Man” Burks and Joe Louis Walker. His relentless road-dog approach—gig after gig, night after night—has won him loyal, lifelong fans everywhere he plays. The Washington Post says Castro is “phenomenal and funky” with “soulful vocals and inspired blues-rock guitar.”

Castro formed The Painkillers in 2012, creating a lean, mean four-piece lineup, capable of delivering soul-shaking, muscular music. The band released The Devil You Know in 2014 and Method To My Madness in 2015, with critics shouting praise and admirers cheering his every move. Castro had stripped his music down to its raw essence with the new, smaller band, sounding bigger than ever. On record and on stage, Tommy Castro & The Painkillers’ road-hardened, seemingly telepathic musicianship bring an unmatched passion to Castro’s blue-eyed California soul and hard-rocking, good-time songs. His hometown newspaper, The San Francisco Chronicle, describes Castro’s music as, “funky Southern soul, big city blues and classic rock...silvery guitar licks that simultaneously sound familiar and fresh.”

With months of tour dates across the U.S. and Europe, Tommy Castro & The Painkillers will be bringing the songs from their new album directly to their fans. No Depression says “Castro plays gritty, string-bending blues like a runaway soul train...a glorious blend that rocks the soul and lifts the spirits.” Blues Revue says simply, “Tommy Castro can do no wrong.” With Stompin’ Ground, he is clearly, once again, doing everything right.