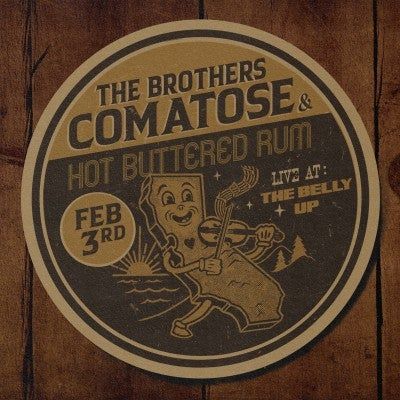 Ticket Price: $20 advanced / $22 day of show / $35 reserved loft seating (available over the phone or in person at out box office)

Whether traveling to gigs on horseback or by tour bus, Americana mavens The Brothers Comatose forge their own path with raucous West Coast renderings of traditional bluegrass, country and rock ‘n’ roll music. The five-piece string band is anything but a traditional acoustic outfit with their fierce musicianship and rowdy, rock concert-like shows.

The Brothers Comatose is comprised of brothers Ben Morrison (guitar, vocals) and Alex Morrison (banjo, vocals), Steve Height (bass), Philip Brezina (violin), and Greg Fleischut (mandolin, vocals). When they’re not headlining The Fillmore for a sold-out show or appearing at Hardly Strictly Bluegrass Festival, the band is out on the road performing across America, Canada, Australia, and hosting their very own music festival, Comatopia, in the Sierra foothills.

Hot Buttered Rum lives for a good time, and a mindful recklessness settles in whenever these five guys step on stage. From Anchorage to Miami, the group’s onstage chemistry fuels the lovefest that is a live Butter show. Rooted in the trajectory of west coast bluegrass, Hot Buttered Rum plays what has been described as California’s own acoustic music.
HBR’s years of touring have given the band the chance to work and play with a wide cross-section of musicians, people like Peter Rowan, Phil Lesh, Chris Thile, Brett Dennen, and Robert Earl Keen. Seasoned veteran Steve Berlin (Los Lobos), acoustic guru Mike Marshall, and left-coast rocker Tim Bluhm (Mother Hips, Nicki Bluhm) have all produced studio albums for the band. Each guided HBR towards the next step in its evolution. It’s a sound that is tough to describe and easy to love, and it has found its way to the most prestigious pop, folk, and bluegrass stages in the country: Telluride, Newport, Bonnaroo, Strawberry, Hardly Strictly, Kate Wolf, Horning’s Hideout, String Summit, Grey Fox, Merlefest, All Good, High Sierra, Wakarusa, and many more.
The next step in Butter’s evolution involves recording three 5-song EPs, each focusing on a part of music that Hot Buttered Rum loves and is inspired by, and each with a different producer. The first EP was recently recorded with Railroad Earth’s Tim Carbone and will be released this fall. The second will be a collection of Ralph Stanley old school bluegrass standards, to be recorded in September with producer Sally Van Meter. The third will be Hot Buttered Rum’s latenight throwdown music, to be recorded in November with SCI’s Kyle Hollingsworth. Together, the three collections of songs will explore Butter’s roots and express Butter’s present passions.
At the center of Hot Buttered Rum is the enduring camaraderie of old friends. The band was conceived on a backpacking trip of high school and college buddies in the High Sierra. What was dreamed up on mountaintops and around campfires has found its way into the hearts, minds, and bodies of thousands.