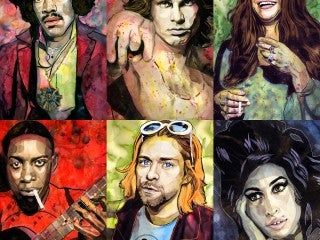 Ticket Price: $22 advanced / $25 day of show / $39 reserved loft seating (available over the phone or in person at out box office)

The Six String Society’s 27 Club illuminates the lives and music of this infamous club. A club in which all the members share at least one thing in common; they all died tragically at the age of 27. Set in a mythical Greenwich Village apartment (circa 1969), the candles burn late into the evening as the stars of this dubious club begin to arrive in the ‘Living Room.’ Our All Star cast includes Whitney Shay (as Amy Winehouse), Lauren Leigh Martin (as Janis Joplin), Anthony Aquarius (as Jimi Hendrix), Austin David (as Kurt Cobain), Robin Henkel (performing the music of Robert Johnson), Jody Bagley, Laura Chavez and others. After making its debut at the Belly Up on July 10th, 2016 the 27 Club production has performed in Nevada casinos, festivals, and is beyond excited to return to the birthplace of the show.

With sparkly dresses, fiery tresses, and a talent rivaled only by her unstoppable hustle, Whitney Shay is one #busylittlesinger. The four-time San Diego Music Award winner (including 2019 Artist of the Year) and 2019 Blues Music Award nominee is scorching stages at home and internationally throughout Europe and South America. Shay’s latest release, A Woman Rules the World, is receiving high praise from music critics who are calling the singer “a future blues icon” (Blues Matters!), “one of the next best things in soul music” (Blues and Rhythm Magazine), and “the epitome of a rising star” (Elmore Magazine). The album landed on several notable music media lists, including: Top Albums of the Year in Blues Music Magazine, France's Soul Bag Mag, and top ratings in Norway's Bluesnews Magazine and Germany's Magazine bluesnews. Shay’s tracks have also been placed in TV/film, including shows on NBC, HBO, Bravo, BET, and Tyler Perry’s A Madea Family Funeral. Shay recently signed to the prestigious Ruf Records label, and will extensively tour in Europe in 2020 with Ruf's Blues Caravan. Whether in studio, on screen, or stage, Whitney Shay’s electric energy, soulful style, and powerhouse pipes keep listeners connected and coming back for more.