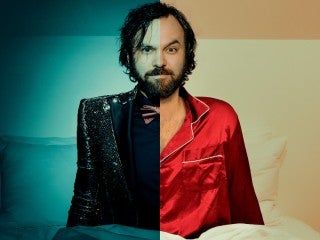 THIS SHOW IS AT HUMPHREY'S CONCERTS BY THE BAY

THIS SHOW IS AT HUMPHREY'S CONCERTS BY THE BAY

Back in December 2017, Shakey Graves proclaimed on his Twitter page, “Next album. New sound. Sell your suspenders.” The tweet was tongue-in-cheek, but Alejandro Rose-Garcia, the Austin native who’s been plying his trade as Shakey Graves since 2007, was making a dead-serious point about his latest album, Can’t Wake Up (Dualtone, out May 4). This ambitious, audacious work heralds an artistic metamorphosis for the 30-year-old veteran, whose risk-taking in painting outside the lines has been rewarded tenfold. “This record is the most I’ve ever intentionally worked on a project, musically speaking, in terms of the scope of it and how much thought went into it,” he says. “It’s a dense album; there’s a lot of information going on.”

That is not a hyperbolic boast. From one moment to the next, Can’t Wake Up veers from the inevitable to the revelatory, its thirteen songs teeming with jarring musical and thematic collisions and thrillingly seamless intersections, gnarly psychological hornswoggles and ecstatic resolutions. Central to the prevailing sense of disorientation are the lead vocals, none of which is purely solo. Instead, each lead performance is shadowed by a queasy harmony or slightly out-of-sync unison part, giving the sense—especially on headphones—that these voices are emanating from inside the listener’s head.

Newfound inspirations the Beatles and Harry Nilsson (“I could only deny the inevitable for so long,” he says of his belated immersion in the sacred texts) cohered around Rose-Garcia’s longtime touchstones, including Elliott Smith, Beck circa One Foot in the Grave, Broken Social Scene, Built to Spill and other indie bands of the 1990s and early oughts.

“I’ve never worked like this before, but I went into the record with the idea of having a thesis statement of what I wanted to get across,” Rose-Garcia explains. “And the place that I got at was that I wanted it to be vaguely Wizard of Oz-themed, and I wanted it to be hectic and a little uncomfortable, like what I refer to as the Big Five Disney cartoons: Pinocchio, Fantasia, Snow White, Dumbo and Bambi. All those movies are terrifying—some of the most stressful movies I’ve ever seen. So I started with this Wizard of Oz thing—’Tin Man’ that has obvious allusions to that—and the idea of black-and-white to color.”

The creative process was paralleled by the conception and execution of the striking, hallucinatory cover art. “I built an elaborate miniature diorama in my house and used plexiglass plates, paint and train set buildings to create a forced-perspective illusion and photographed it,” Rose-Garcia explains. “The goal was to have the cover and the process to mirror the album in a way, and I am thrilled with how it turned out.”

Can’t Wake up is Alejandro/Shakey’s second official studio-album project—more official, in any case, than the several mostly solo odds-and-ends collections he’s been putting out through Bandcamp since his very first release, Roll the Bones, in 2011. It was his previous Dualtone album, 2014’s And the War Came, and centerpiece song “Dearly Departed” that lifted Shakey from hard-core cultdom to the elevated status of bona fide career artist.

Up to now, he’s been categorized as an Americana singer/songwriter, thanks to his traditionally rooted songs, fluent acoustic-guitar picking, Texas roots and the aforementioned cowboy hat. Indeed, Shakey was named Best Emerging Artist award at the 2015 Americana Music Awards. But that tag will undoubtedly be dismissed as restrictive and irrelevant once this righteously radical new album gets digested by critics and discerning listeners. Because Can’t Wake Up is an extreme example of what happens when a kid from an artistic family is encouraged to use his imagination from early childhood onward.

“Not that I hadn’t made stuff that I really wanted to, but with this record, I just wanted to go back to building stuff,” Rose-Garcia points out, referencing a lifetime of doing just that. “So the creative process of building this record started out with me in a bathrobe in my house just doing what comes naturally, and then finding pieces of what I want to write about everywhere.”

The figurative term “musical journey” is overused these days, but Can’t Wake Up is largely the result of a series of literal musical pilgrimages that took Rose-Garcia and his collaborators—drummer Christopher Boosahda, guitarist Patrick O’Connor, bass player Jonathan Shaw and honorary bandmember Rayland Baxter—to several far-flung locales. “We went to Levon Helm’s barn/studio in Woodstock, Kevin Costner’s ranch on the Roaring Fork River outside of Aspen, the Belmont Hotel in Dallas, and one final trip to Echolab Studios in Denton. In each of these expeditions, we would ship our gear in, live on-site for 10 days and let the backdrop and local characters really bleed into the experience. The patchwork quilt of it all really feels like the last few years of my life leading up to the birth of this record. This was a new process for me, and a game-changing one.”

A ton of personal experience went into the material, stretching all the way back to the five years straight out of high school Rose-Garcia spent in L.A., taking a shot at starting an acting career and taking emotional lumps as his childhood fantasy of Hollywood was replaced by the bitter reality of rejection and monotony. “Dining Alone,” in which the album hits emotional rock-bottom, ruefully recounts that experience. “Same old shoes on the same old feet/One-track mind, one-way street,” he sings, the juxtaposition of soaring melodiousness and near-despair echoing Harry Nilsson at his most existentially isolated. “Nothing’s going to change for the same old me/Eat, sleep, do it again.”

“Big Bad Wolf,” likewise, comes off like a slice of autobiography, with its references to the “silver screen” and football (he eventually landed a recurring role in the TV series Friday Night Lights, but only after returning to Texas). The title suggests both his preoccupation with animated fairy tales and his unquenchable hunger to create. A similar sense of striving permeates “Kids These Days,” as Rose-Garcia sings, “Everybody tries…to be somebody/somebody’s wet dream prom king,” amid overdriven power chords. “Mansion Door,” by contrast, shimmers with hopefulness, lifted by rippling guitars, Beatlesque psychedelic vocal flourishes, Jiminy Cricket-like whistling and images of “My one and only lonely star” twinkling in the heavens.

At the same time, “Mansion Door” establishes the overarching theme of Can’t Wake Up, which is further played out in songs like “Counting Sheep,” “Foot of Your Bed” (which can be heard as an ardent love ballad or the creepy reverie of a stalker) and “Tin Man,” stoking this song cycle to the sweat-soaked turbulence of a fever dream.

According to Rose-Garcia, the album also functions as a private dialogue with certain listeners. “I get a lot of really intense, very sweet fan mail from people who have either kept themselves from committing suicide by listening to my music or have lost one of their loved ones to suicide, but my tunes were a bright spot for them,” he says. “I got one from a girl not too long ago at a concert who said, ‘My boyfriend finally succumbed to depression, but for a while there, your music was something we’d gather around that would make him feel sane.’ So to a certain degree, this is a ‘Don’t kill yourself’ record. I really wanted to get deep inside that kind of gloomy, hectic craziness—the dream analogy of not being able to wake up or not knowing who you are. Or, in ‘Dining Alone,’ being mired in monotony. And a lot of the ‘you’ on the record isn’t a girl or a boy; it’s the person listening to the record. I’m singing into the ear of somebody who might need it. If heard some of these songs when I really needed them, I feel like they would hit the nail on the head.”

Not every song is suffused in seriousness. “We wrote ‘Aibohphobia’ in the mountains as a group,” Rose-Garcia recalls. “We were trying to work on more serious material, but we had all had a little bit of LSD and started writing that song. Most of the lyric is a palindrome, including ‘Aibohphobia,’ which is actually a joke term for the irrational fear of palindromes. Even the last sentence of the song is one long palindrome. We got the hugest kick out of playing that song for each other.”

He sees the distinctions as well as the parallels between the two artistic endeavors he’s pursued. “Music, to a degree, values individuals being themselves, in that good music tends to be rooted in honesty as opposed to a disguise,” he notes. “It can be storytelling, but it’s usually pretty direct. Whereas acting is about being unrecognizable as yourself. So in a sense, the two modes are opposite. But on the other hand, I use an alias when I make music, because I like the storytelling aspect of having an alias or a band name—it just adds another shade of paint.”

Rose-Garcia has been encouraged to go for it by Dualtone, which has given him a standing offer to release any album he feels warrants a wider release. “They’ve been really wonderful in a lot of ways,” he marvels, “but especially in the sense of trusting me and being very supportive of my putting out DIY stuff in between. Because that’s what this record is—a bigger version of DIY. That’s why I make stuff; I would do it if no one was watching me. The inherent pleasure I get out of creating anything isn’t for other people’s ears any more so than my own.”

In a sense, the album is a microcosm of Rose-Garcia obsessively artistic existence and its ever-expanding horizons. “The beautiful lesson of all this is having to trust yourself, to be willing to start something that you don’t know the outcome of,” he reflects. “Or to lean toward something just because it feels right, even though it may not be what you originally put down on paper. Those are the kind of stories in this record. They’re not so much about specific people, or even myself per se. They’re different shades of every person’s life.”

With her spellbinding voice and time-bending sensibilities, Sierra Ferrell makes music that’s as fantastically vagabond as the artist herself. Growing up in small-town West Virginia, the singer/songwriter/multi-instrumentalist left home in her early 20s to journey across the country with a troupe of nomadic musicians, playing everywhere from truck stops to alleyways to freight-train boxcars speeding down the railroad tracks. After years of living in her van and busking on the streets of New Orleans and Seattle, she moved to Nashville and soon landed a deal with Rounder Records on the strength of her magnetic live show. Now, on her highly anticipated label debut Long Time Coming, Ferrells hares a dozen songs beautifully unbound by genre or era, instantly transporting her audience to an infinitely more enchanted world.

Co-produced by Stu Hibberd and10-time Grammy Award-winner Gary Paczosa (Alison Krauss, Dolly Parton, Gillian Welch), Long Time Coming embodies a delicate eclecticism fitting for a musician who utterly defies categorization. “I want my music to be like my mind is—all over the place,” says Ferrell, who recorded the album at Southern Ground and Minutia studios in Nashville.“I listen to everything from bluegrass to techno to goth metal, and it all inspires me in different ways that I try to incorporate into my songs and make people really feel something.”In sculpting the album’s chameleonic sound, Ferrell joined forces with a knock out lineup of guest musicians (including Jerry Douglas, Tim O'Brien, Chris Scruggs, Sarah Jarosz, Billy Strings, and Dennis Crouch), adding entirely new texture to each of her gracefully crafted and undeniably heartfelt songs.