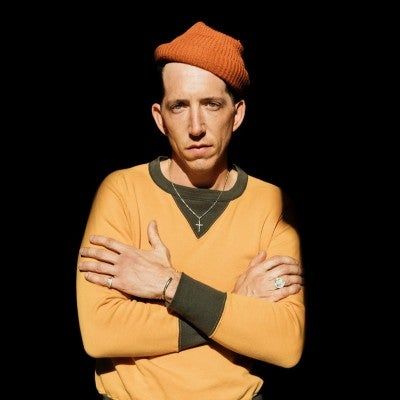 This show is at Casbah.

THIS SHOW IS AT CASBAH

In three parts
I. Reshuffling the Deck
II. Ten Daggers on the Table
III. The Songs

I. RESHUFFLING THE DECK

Day after day, pencil in hand, always dressed in blue. Never feeling satisfied. Itchy. Incomplete. Attired halfway between a businessman and a janitor, Pokey LaFarge tries to make sense of trouble he’s seen and trouble he’s been in. This is the Great Why of his unending passion for songwriting. An unquenchable need to be heard in a world where everyone is talking and nobody is listening.

The songs on Pokey’s transformative new album MANIC REVELATIONS demand your attention. Here, you get the feeling this man is constantly reshuffling the deck in favor of some outcome or other. Each chord, each riff shades the stories he sets up in his lyrics. But make no mistake – no matter how the cards lay, he is searching for the purest truth; he loves laying in the muck. Whatever it takes to serve the song. He wouldn’t know what to do if his life were any other way.

Sit with him over a cup of coffee at The Mud House on Cherokee Street in South City St. Louis, and you’ll see for yourself: he easily is uneasy, pushing one squalid thought away to make way for another, sometimes darker one. It’s not that he’s a miserable guy; quite the opposite. To lay it plain: you simply don’t get songs like these without becoming very friendly with the darkness in your head, and with the social distortion of the day. These are the currents Pokey dips into to create his songs.

In conversation, he’ll stare right through you as you speak. They call it the Quiet Eye. It’s that uncanny ability the best athletes in the world have; it’s what sets them apart. Pokey has it too. You see this with pitchers in Pokey’s beloved game of baseball. A guy can look at a complex scene and instantly focus on what he needs to do to get a strike. In a noisy stadium, there’s a focus from the mound to the catcher’s mitt. That’s the game. In a flash, the ball moves at 90-some-odd miles per hour, and the fate of an entire city hangs in the balance. When that pitcher’s focus delivers, a game is won – and a banged up old Midwestern city like St. Louis is instantly elevated to an all-century high.

Taking a sip of his ever-present cup of black coffee (switched out for red wine every day at sunfall), Pokey is the pitcher who breaks his stillness, winds up, and fires off the final strike of a shutout. At the table, he eventually tips his gaze to you, inhales, and launches back into the conversation. In these moments, Pokey’s as likely to agree with what you’ve just said as he is to turn the table upside down.

Knowing that music is as influential in today’s jagged American culture as the country’s favorite pastime, it’s powerful to see Pokey locking into and emerging from his Quiet Eye stance. Again, you don’t get songs like these without a little fire. And when the conversation turns to the heat that brews in his own belly, Pokey leans in, stares straight ahead, and offers this: “The darkness? The anger? It comes out in my singing. With a beautiful lyric and a beautiful melody. It comes out in the passion.”

“All these opinions out there…” he trails off, looking over his right shoulder at a painting of Woody Guthrie hanging on the wall. “It’s about getting people to feel something. Other than anger.”

Plenty of feelings reveal themselves in the 10 forlorn, haunting melodies on MANIC REVELATIONS. Each one of these songs is the culmination of a decade of hard work in what has become something of a bellwether city. And with the release of these 10 songs, St. Louis will have something more than World Series wins to mark a moment in time.

But Pokey has no intention of winning any accolades with his music. He just wants to get more at home with the noise in his head. Comfortable would be nice, but nobody’s ever heard Pokey speak of a dream of an easy life. Those types of songs are for somebody else to sing. Pokey LaFarge makes good truck out of this thing that he pushes against – whatever it may be in a given moment.

“That’s what the record’s about: confronting,” says Pokey. “For me, this whole album is about composing and confronting.”

II. TEN DAGGERS ON THE TABLE

Pokey LaFarge is a musician. He is a storyteller. He is a feeler of feelings. He is a narrator of the messy, unkempt American experience. He sits, he watches, he writes. Everything that’s worth happening happens in his songs. Like the long line of writers and performers he descends from, music isn’t something Pokey does – it’s something he is.

This is why MANIC REVELATIONS shines like 10 daggers laying on the kitchen table in his St. Louis home. From that vantage point, in the center of this vast continent, Pokey takes long looks from shore to shore, feeling the direction of social winds, ingesting sights and sounds from all around, observing the news of the day.

And so he was ready for the evening when a sociological tinderbox caught fire. Mere minutes from his front door, night after night, social unrest caused everyone in America to stop and wonder which side they were on. In the face of this upheaval, Pokey took to his studio and began writing. That’s how artists deal with uncertainty: they bleed on paper until the pain subsides. Soon, he found that one song led to the next. He couldn’t put it down. One manic revelation led to another. In the thrall of it all, an album started to appear in front of him.

“The manic revelation is the state where artists create,” says Pokey. “I got to the point in writing these songs where I felt like a house on fire that just kept burning.”

But long before he caught fire, he started on the smallest stage one could imagine: playing by himself on street corners. He moved to the west coast to follow the ghosts of the Beat writers, and Steinbeck before them. He began to ply his craft in the bitter cold of Madison, Wisconsin; in Kentucky, he learned the mandolin; and in the sweltering humidity of Asheville, North Carolina, he learned the fiddle. That’s where he met a few guys who would urge him to come to St. Louis to play; soon after, they would become his backing band, the South City Three.

And now, thousands of shows on four continents later, we find ourselves here, on the eve of release for Pokey’s most powerful album.

“I’ve always felt that the live shows were the best representation of our music,” he says. “Only now do I feel that I’ve made a better record than the live performance.”

This is the one where the style of music recedes, as the foreground swells with evidence of Pokey’s observations of pain, joy, confusion. This one is where his artistic character shines. And where we see that artistic blood on the page, unvarnished and raw. MANIC REVELATIONS is the second coming of an artist who, over the past decade, has taken the workaday approach to building a body of work, and a worldwide fanbase. After a decade of struggle, it’s all paid off here. And it’s all riding on this album.

True to this statement, there are no lookback songs on MANIC REVELATIONS. This album is all about looking outward, looking forward – and we’ve never seen Pokey’s observational craft in a more stark relief. This hasn’t happened by chance. Artists who write from real life experience have no choice but to change themselves if they want to progress their art. With this in mind, Pokey has been hard at work pushing out the corners on himself.

MANIC REVELATIONS kicks off with a cold open.

A crack of the snare and an insistent upright bass riff are the clarion call. From there, “Riot in the Streets” throttles up, ripping MANIC REVELATIONS wide open.

Halfway through the song you realize this story—where the rich and the poor alike line up to riot, or peacefully protest, while TV news anchors somewhat unreliably narrate the scene—is reported judiciously; he isn’t swaying the listener to one side or the other.

“Look, I’m an opinionated person,” says Pokey. “But that doesn’t extend itself into my writing. I’ve always been an observer. Telling a story isn’t always about having an opinion. It’s about painting a picture.”

In “Must Be A Reason,” people fall into and out of—and back into—love. On this song, and all over the album, he shoves in the crying wherever he can. Not because he thinks it’s entertaining. Because he’s lived it. And he knows that others know this sadness, too. On an album filled with personal and cultural pressure release valves, this tune is the one about the politics of romance.

“Bad Dreams” illustrates a classic “wherever you go, there you are” story: lovers leave home to travel the world. They want to escape the friction at home. Some call this “pulling a geographic.” When they return, it’s clear that changing location didn’t help; the real problem is still staring them in the mirror.

“You realize you’re coming home,” Pokey explains, “to the same problems that caused you to go away in the first place. It’s not the city. You can’t get away from yourself.”

Now, if you listen to only one of these manic revelations, it should be “Silent Movie.” He wrote this one in 15 minutes. 15 minutes! That decade of looking and writing and traveling and playing culminates in this song. And truth be told, we’ve never heard this kind of song from this guy.

“Silent Movie” is on par with the best social narratives of Nilsson, Campbell, Kristofferson. As a lone guitar line drags the song along, Pokey pulls focus on a kid adorned in headphones on a Chicago El train. He may be on his way to school, or he may be on his way home. Regardless of the position of the sun in the sky, the world outside the windows is too much for this kid to take in. “Cover your ears and watch the world go by,” Pokey sings, “That’s how we survive.” A clarinet drizzles a saddening pattern over the entire scene, and we begin to wonder: where are we headed if a whole generation is growing up feeling this way? Shoving in the sadness. The song goes on: “Growing up is a scam / The truth is a lie / Better off staying a child / Till the day you die / Stay inside your mind / Or go outside and find a place to hide.”

“The song is about shutting out the noise,” says Pokey. “Coming up with your own soundtrack, in this country where there’s more questions than answers, it seems.”

Never feeling satisfied. Always dressed in blue. Diving into the darkness. Turning the table upside down. Wherever you go, there you are. Fucking stay together. Better off staying a child. This album is an epoch for Pokey LaFarge. You feel it all over these 10 revelations.

“Now I’ve found my groove,” says Pokey. “I don’t have to overcompensate anymore. Nobody looks and sounds like me. And I’m OK with that.”