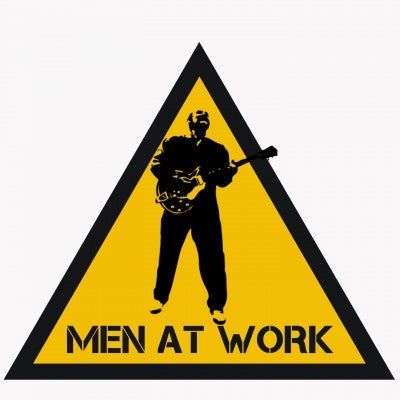 Ticket Price: $75 advanced / $80 day of show / $132 reserved loft seating (available over the phone or in person at out box office)

Men at Work began its life early in 1979. It was a natural birth, coming from the joining together of the acoustic duo of Colin Hay and Ron Strykert, with drummer Jerry Speiser and sax/flute player Greg Ham. They played initially at informal jam sessions on a Saturday afternoon at the Grace Darling Hotel in Melbourne. All the members had known each other for a number of years, but in '79 they found themselves with a common musical ground-, a desire to form a band playing exciting original music that would also be fun. Colin and Ron already had a core of great songs that they played acoustically, and these became the basis of the first band sets.Colin and Greg
After a couple of months of playing at the Cricketers Arms Hotel in Melbourne, Men at Work decided to include a fifth member, bass player John Rees. The band played every Thursday night at the Cricketers for over a year, by the end of which they had established a dedicated following of fans who spread the word around town. By the end of 1980 Men at Work were in a position where they could sell out almost any venue in Melbourne, without even having a single song on radio. When the band was signed by C.B.S. and released "Who Can It Be Now". the fuse was well and truly lit.

In 1982, after considerable success in Australia with two No. 1 singles and a No. 1 album, Men at Work headed overseas. When they arrived in the US, primarily to do the support for Fleetwood Mac's tour, the first single had just entered the charts somewhere in the 60's. By the time the band left to return home "Who Can It Be Now" was No.1 on Billboard, the Club shows had queues around the block, and there was definitely a feeling in the air that something special was happening.

1983 was the year that the world woke up to the Men, and there didn't seem to be a culture or a country that hadn't taken "Down Under" to its collective heart. From Austria to Zimbabwe, this tongue-in-cheek anthem worked its magic, breaking records along the way. 15 weeks at No.1 in the US for both the album and single, No. 1 at the same time on both sides of the Atlantic again for album and single, and so on. To continue the earlier analogy, if the fuse was lit at the end 1980, in 1983 the bomb had well and truly exploded and still the noise was not dying down.Colin and Greg
Hard on the heels of the debut "Business As Usual" came the second album, "Cargo", recorded in Australia during the middle of '82 (using the same producer, Peter Mclan). Cargo's release was delayed by the enormous continuing success of "Business" overseas. The band was caught in an enviable dilemma, to release a third and possibly fourth single from the first album which would keep it well up in the charts for months to come, or to release the new album and single while it was still fresh. The Men chose to do the latter, because they were keen to introduce the new songs to the public, especially from the point of view of the live shows. So "Dr Heckyll and Mr Jive" came out and went Top 10, followed by "Overkill" which peaked at No.3 and "its A Mistake", which got to No.6. Within a 12 month period the band had five Top 10 singles!

1983 was also the most intensive year of live performances the band had experienced, with tours of Australia, UK and Europe, Japan, and two tours of the US and Canada. Some of the highlights amongst many, were the performance at the '83 US Festival in front of 300,000 people, which was broadcast via satellite live to the U.S.S.R., a wild show at the Apollo Theatre in Glasgow where thousands of maniac Scots welcomed home a prodigal son. and winning the Grammy for best new band.

Apart from the live shows, Men at Work had also established a significant presence on television, in particular on the brand new 24 hour music channel. MTV. From the first interview in '82 (which was also one of MTV's earliest) through a series of humorous, unpredictable and always entertaining clips, the personality of the band shone out, and in a sense became an intrinsic part of the new format.

By the end of '83 both Men at Work and the world, were ready for a break from each other. Early '84 also saw the departure of John and Jerry, whilst Colin took time out to produce an album for a friend's band, Greg played with his girlfriend in a good-time R&B band, and Ron partied in the danger of his own home.Colin and Greg
Xmas '84 found them back at work in the studio recording and producing "Two Hearts", which was followed in '85 by tours of Australia, Japan, Europe and the Caribbean, including an exciting performance at the Montreux Pop Festival in Switzerland. By the time the band went into hibernation at the end of '85, total record sales were in excess of 12 million.

Since then, Colin and Greg have pursued their respective solo careers, but have always kept in contact. with Greg occasionally sitting in at some of Colin's shows to play a couple of Men at Work songs, a situation that invariably brought the question from fans of "When are you guys going to put the band back on the road?" The answer was always "sometime". but there were commitments for both members that kept that dream just a bit out of reach every time the situation arose.

Colin's solo recordings and live tours had established him as an individual talent to be reckoned with. From 1986's "Looking For Jack", through "Wayfaring Sons" (1990) and the purely acoustic "Peaks & Valleys" (1991), "Topanga" (1994) up to his current album "Transcendental Highway". he has demonstrated a depth of songwriting and lyrical skill that has won a new generation of fans, and shown a voice that just seems to get better and better

Colin has also, when his musical career allowed the time. continued his acting and has appeared in major Australian films including "Wills And Burke", "Raw Silk". "Georgia" (with Judy Davis), "Cosi" and "Heaven's Burning" and the soon to be released "The Craic". As well he wrote the title track for Universal Picture's "Gold Diggers".Colin and Greg
Greg has maintained a constant musical presence in Australia. initially performing with R&B combo "Relax With Max". and later with the Comedy Cabaret band "Miss Dorothy and the Endless Love Machine". As well he has pursued a Film/TV career with performances (and music credits) in Australian cult film "Pandemonium" and the US/Australian co-production "Backstage" (with Laura Branigan). On the TV side, he has been Musical Director for three ABC series. the children's program "Oz Kids", and the Comedy shows "While You're Down There" and "Something Hot Before Bed" as well as writing themes for a number of national advertising campaigns. Coincidentally Greg has also just finished setting up a recording studio at his home, and has become a father for the second time with the recent birth of daughter Camille.

Perhaps it was a special alignment of the planets, or maybe it was the number of offers and requests for tours and performances that came in. Whatever the reason, Colin and Greg decided that '96 would be the year to wake Men at Work from its slumber, to bring those great songs back to the live stage and above all have some fun in a world where music seems to be taking itself way too seriously. It's time.

After two huge tours of South America in 1996 and 1997, and a few surprise performances in the USA, including LA's House Of Blues, The Men are now to hit US stages for their first national tour in over a decade.

As well as marking the return to live performances in the US, 1998 also sees the release of the first new Men at Work recording since Two Hearts. "Brazil", recorded live in Sao Paulo (Brazil) features not only live versions of all the Men at Work favourites but also a brand new studio recording. "The Longest Night".