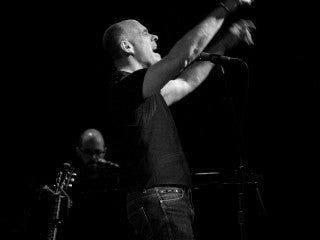 Ticket Price: $45 advanced / $48 day of show / $79 reserved loft seating (available over the phone or in person at out box office)

After winning a Grammy for his soulful ballad “Walking in Memphis”, Marc Cohn solidified his place as one of this generation’s most compelling singer/songwriters, combining the precision of a brilliant tunesmith with the passion of a great soul man. He’s a natural storyteller, balancing the exuberant with the poignant, and able to distill universal truth out of his often romantic, drawn-from-life tales.

Cohn followed up his platinum-selling debut with two more releases in the 1990s, at which point TIME magazine called him "one of the honest, emotional voices we need in this decade" and Bonnie Raitt declared, "Marc is one of the most soulful, talented artists i know. I love his songs, he's an incredible singer, and I marvel at his ability to mesmerize every audience he plays for." Raitt, James Taylor, David Crosby, Graham Nash and Patty Griffin all made guest appearances on Cohn's early records for Atlantic, as his reputation as an artist and performer continued to grow. In 1998 Cohn took a decade-long sabbatical from recording, ending in 2007 with Join The Parade. Inspired by the horrific events following Hurricane Katrina and his own near fatal shooting just weeks before, "Parade" is his most moving and critically acclaimed record to date. About his latest album Listening Booth: 1970, Rolling Stone said, "Cohn has one of rock's most soulful croons - a rich immediately recognizable tenor that makes these songs his own."

Unlike many L.A. transplants, singer-songwriter Chelsea Williams didn’t arrive as a starry-eyed dreamer seeking a catapult toward fame. It would have been a little soon for that anyway, considering she got there before she’d even started walking and talking.
With a vocal-coach mother and that Joni Mitchell-inspired name, it’s hardly surprising that Williams embraced music early on. By 12, she was writing songs and hitting open-mic nights. At 14, she joined a band of blues players closer in age to the grandfather she never knew. At 21, she started busking at Santa Monica’s Third Street Promenade. After watching her solo mom struggle to raise two daughters (even selling her guitar to buy them Christmas gifts one year), Williams’ simply wanted to make a living playing her dreamy-sounding pop for attentive — and hopefully generous — listeners.

Performing five hours a day, four days a week, she not only achieved that goal, she wound up scoring a high-profile TV commercial singing in Maroon 5’s “Playing for Change” version of their hit “Daylight”, and landing not one, but two record deals. Catching the appreciative ears of prominent Promenade strollers, including Ron Howard and the revered influence Sheryl Crow — to whom Rolling Stone Country compared Williams in a 2017 ”10 artists you need to know” feature — was a huge bonus. The release of Beautiful and Strange, her second album for L.A. independent label Blue Élan Records (that second deal), will bring even more attention for Williams’ musical charms.

Nailing down her eclectic style is somewhat of a conundrum, however. Williams’ airy, elegantly nuanced vocals carry reminders of Sixpence None the Richer’s Leigh Anne Nash and the Sundays’ Harriet Wheeler. There are also tangential comparisons to jazz chanteuse Kat Edmonson and the recent work of genre-fluid Hymn for Her singer Lucy Tight. If those references seem esoteric, that’s a good thing, because having to stretch for comparisons reinforces the unique allure of Williams’ delivery. There’s no shoegazing detachment or sonic tripping involved; if anything, the opposite is true.

On Beautiful and Strange, which follows 2017’s Boomerang, Williams and her producer (and husband) Ross Garren, somehow strike a wire-walker’s balance between the seemingly opposing forces of childlike whimsy and mature sophistication. The former manifests as toy pianos, singing saws and a general lightness of being that floats like a breeze throughout these 11 tracks. The latter permeates their sweeping, deeply-layered arrangements, as well as Williams’ engaging style, whether she’s dissecting relationship dynamics or examining the very notion of destiny.

“If I had to define my style, it would be Americana with a bit of modern pop, topped off by a healthy dose of reckless abandon,” Williams says. “I never want to confine myself creatively, and I apply these categories very loosely.”

Williams, who also performs in bluegrass/Americana band the Salty Suites and met Garren when both played in a country cover band, explains: “My music tends to be as diverse as my musical taste. I grew up listening to every genre, from classic greats like the Beatles and Yes to the Flaming Lips, the Pixies and all the way over to Joni Mitchell, Bonnie Raitt, John Prine and Tom Waits. I even dabbled in jazz with people like Ella Fitzgerald and Billie Holiday.”

Her diverse musical influences are evident all over these tracks. “Muskegon” pays subtle homage to about half of The Beatles’ career. Then there’s the title tune, a merry-go-round waltz on which Williams’ vocals ribbon around a symphony of harmonicas, keyboards and strings as she sings about the dichotomies between “magical” and “scientific” thinking.

“The overarching theme of Beautiful and Strange is that regardless of all the lies flying around and clashes in ideology, I still think that there is an exquisite charm and beauty to all of the chaos,” explains Williams. “Sometimes, I think about what would happen if we could all just step back for a moment and appreciate this beauty.”

It’s a lovely sentiment that encapsulates the album’s feeling of optimism despite the darkness. Even “Wasted”, the opening track about a destructive relationship that needs to have its plug pulled, is filled with sunny pop hooks.

The Americana-pop “Red Flag”, one of two co-writes (with Julian Bunetta, Toby Gad and John Henry Ryan), is equally engaging. With one marvelously executed run up the scales, Williams perfectly evokes the breathless, caution-to-the-wind intensity of new love’s passion.

But it’s the gorgeous and moving “Dust” that clinches Williams’ worthiness for accolades such as her 2017 Hollywood in Music and Media Awards win for Singer-Songwriter of the Year. Sounding understated at first, the intensity builds as Paul Wiancko’s cello takes over for Garren’s Fender Rhodes until her voice splits into an entire chorale of angelic notes before intricately arranged strings bring a final catharsis. It’s a powerful moment, one born from the ironic ascension to a heavenly peak by way of the lowest roads.

Williams and Garren tracked “Dust” at home in their bathroom on a stifling 100-degree day. To avoid ruining the recording, they had to silence their air-conditioning and turn off the heat-producing overhead light. “With each take we did, it got hotter and hotter in the bathroom,” Williams relates. “So I ended up recording the vocals in a pitch black bathroom in my drawers.”

After years of busking in whatever conditions a day might bring — from label heads and musical idols to wildfire smoke and a guy who liked throwing dirty socks her way — she wasn’t fazed. In fact, Williams still tries to hit the promenade at least a couple of times a month when she’s not touring.

“It’s an important part of my core identity,” she says. “And I never feel quite like myself when I spend too much time away.”

Beautiful and Strange is the culmination of all the experiences that have led Chelsea Williams to this point, and it’s clear she’s not finished yet.