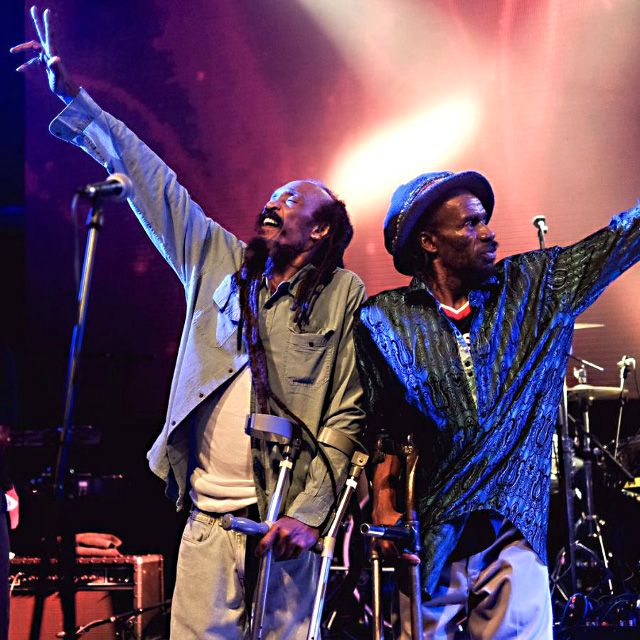 Ticket Price: $30 advanced / $33 day of show / $53 reserved loft seating (loft seating is available over the phone or in person at our box office)

Israel Vibration works with some of the best original recording musicians in the business. They are rock solid. Israel Vibration has an extensive catalog of music that consistently keeps coming with many classic hits such as Ball Of Fire, Get Up & Go, Cool & Calm, Why Worry, Vultures, Licks & Kicks, The Same Song Their latest album release is called Play it Real Along with the album there is a music video called Man Up.

Israel Vibration has done many major US tours with Kings Music International featuring Wiss and Skelly and Bunny Brissett on vocals. Their extensive music catalog spread out worldwide before the CD market went online. Ras Records and Jim Fox of Lion and Fox recording Studios in Washington DC were instrumental in setting their foundation as one of the greatest reggae groups in the history of reggae music.

Mention the name Israel Vibration in reggae music circles and watch the warmth of recognition and appreciation of anyone who has seen or heard this very special vocal group. The positive vibrations emanating from the music of Israel Vibration have been spellbinding audiences, critics and DJs for over three decades. The lead vocalists, Wiss and Skelly cast a harmonious musical spell, weaving traditional roots reggae with a mesmerizing sound and deeply spiritual message. Israel Vibrations have been touring very strong worldwide for many years. They are regularly featured internationally on most of the major Reggae Festivals.

Israel Vibration members Cecil Spence (Skelly) and Lascelle Bulgin (Wiss) were born in Jamaica, West Indies. Each is a victim of Poliomyelitis (Polio). They met as children in the Mona Rehabilitation Center into which they were placed because of their families' limited resources and their needs for specialized medical care. They learned early on the necessity for developing survival skills, and although polio is an undeniably crippling and debilitating disease, the youths never let their physically challenging situation overcome their willpower and their creative abilities. They found strength in the faith of Rastafari through the guidance of His Imperial Majesty, Emperor Haile Selassie I of Ethiopia, and began composing and singing songs which expressed their spiritual beliefs.

Their spirituality and stance on issues relating to their residency at the Mona Rehabilitation Center caused them to be expelled from that institution. Undaunted, they found solace, comfort, and sustenance in their music, which won them the support of their local community and provided them with encouragement to pursue their music careers. They began recording in 1976, enjoying a hit with the poignant Same Song, which was licensed to EMI and brought the group international attention. Their musical careers seemed to be taking off, but, like many Jamaican artists, Israel Vibration's recording career was set back by a local industry plagued at that time by questionable accounting practices, musical piracy, and a lack of tour support. In 1983, the group broke up and its members moved to the States both for superior medical care and to pursue solo projects.

In 1988 Israel Vibration began building their extensive catalog with Strength of My Life, Praises, Forever, Vibes Alive, IV, On The Rock, Free to Move, and several dub albums. On the Rock garnered much praise the single and video "Rudeboy Shufflin'," which, along with the "Feeling Irie" video, was aired on BET as well as other television programs throughout the US and abroad. On The Rock and its follow-up Free To Move reached their height of success upon reaching number one on the CMJ New World charts. Their 1999 release, Pay the Piper, displays more of the strong material songwriters Skelly and Wiss are known for, and the album's featured video "Hard Road" was seen in 3900 Blockbuster video stores during the month of January, 2000. Their album Jericho, released in 2000 was another strong work featuring the best musicians and harmonizers Jamaica has to offer. Skelly and Wiss fully commit to each honest lyric and sing from the heart with the true spirit of universality. Israel Vibration has continued putting out strong albums with their latest ones being Reggae Knights and Play it Real. Their overall catalog is very deep and consistent. It is a great musical contribution to the world.

The Originators are a group of Musicians from all corners of San Diego, CA. Each member is a lover of Reggae Music and brings their own personal style to the sound. Together the band brings a mix of influences from 1960's, 70's and 80's Reggae. Songs range from Traditional Reggae of the 1960's to UK Lovers Rock to Roots Reggae of the 1980's.