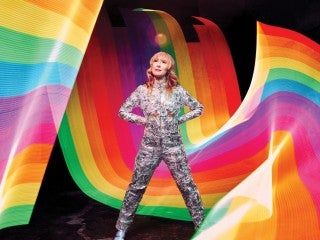 Ticket Price: $25 advanced & day of show / $44 reserved loft seating (loft seating is available over the phone or in person at our box office)

Heartless Bastards have spent the past decade in motion, boldly pushing their unique brand of rock ‘n’ roll into new shapes over four acclaimed albums and nearly non-stop roadwork. Now, with RESTLESS ONES, the band sets out once again, blazing a path to a place of shifting moods, seasoned songcraft, and unbridled spontaneity. Heartless Bastards’ fifth studio recording and follow-up to 2012’s breakthrough ARROW, the album finds singer/songwriter Erika Wennerstrom exploring as-yet-unvisited avenues of sound and sensation, her bravery and ambition readily apparent in the emotional timbre and the sheer physicality of her songs. “Wind Up Bird” and “Into The Light” are straightforward yet stunningly sophisticated, shot through with layered guitars, atmospheric harmonies, hints of synth, and a powerhouse rhythm section adept at both subtle swing and heavy horsepower. Wennerstrom’s spellbinding vocals are of course front and center, her one-of-a-kind voice as primal, cathartic, and indefinable as ever.

RESTLESS ONES was finished in the fall with two mixing sessions at Congleton’s Elmwood Recording in Dallas. Heartless Bastards' next challenge is bringing the album’s studio-crafted songs to the stage. “It’ll be fun to chuck it all at the wall and let the collective experience of band/audience dictate the conversation of the music,” Ebaugh says. “That's the mission ultimately: rock ‘n’ roll communion.”

Rich with purpose, passion, and commanding musicianship, RESTLESS ONES captures an idiosyncratic band exploring their craft and soul in an effort to reach a place that’s both true and transcendent. Heartless Bastards continue to drive their monumental music ever forward, towards hidden vistas and horizons still unseen.