with Greg Douglass and The Pompatus Of Love Band 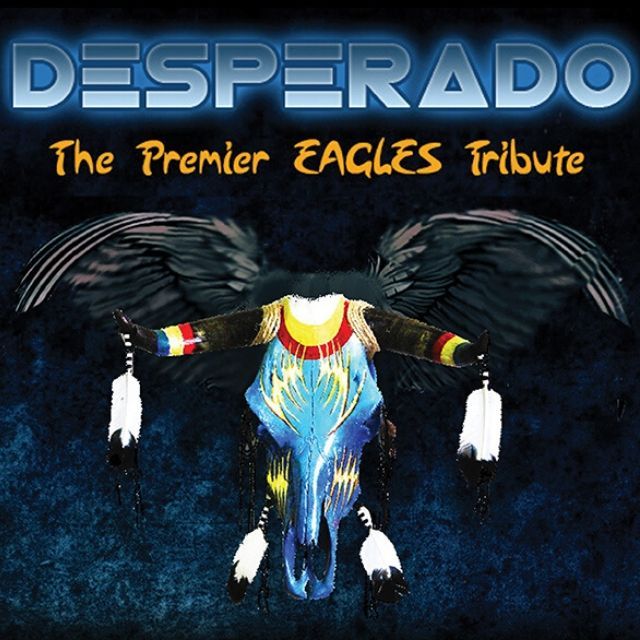 with Greg Douglass and The Pompatus Of Love Band

This show has been rescheduled from 7/10/2020. All tickets purchased will be honored.

Ticket Price: $18 advanced / $21 day of show / $32 reserved loft seating (loft seating is available over the phone or in person at our box office)

Desperado, Southern California's Premier Eagles Tribute, is just that. With five lead vocalists and instrumentalists who have honed their musical skills in a variety of professional projects, "Desperado" is truly a cut above their counterparts with their "all live presentation" (no backing tracks or samplers used in their show) of the most popular band of the 70's, the Eagles. Singing the Eagles soaring harmonies while executing the guitar parts and rhythm track to perfection, Desperado challenges the listener to tell the difference between what is being played live and what the original recordings sound like.

Spinning off from another well-known Eagles tribute band, leader and founding member Aaron Broering spent years putting together just the right combination of musicians to continue his dream of performing these well-crafted songs with the highest of skill. Recruiting performers who have traveled the world performing with The Beach Boys, Dick Dale, David Ruffin of the Temptations, Sam Moore of Sam & Dave, and with Eagles Timothy B Schmit, Don Felder, and J.D. Souther, Desperado truly is "Southern California's Premier Eagles Tribute."

Guitarist Greg Douglass , born in the San Francisco Bay Area on October 11, 1949, started playing in 1964, originally influenced by surf king Dick Dale and later, of course, by the Beatles. Graduating from high school in the Summer of Love in 1967, Greg witnessed mind-blowing early performances by Jimi Hendrix, The Who, and the Yardbirds with Jeff Beck and Jimmy Page. Greg started his own acid-rock band called Country Weather, who toured with Santana, Sly and the Family Stone, and Ten Years After. After failing to score a record deal, Greg quit the band and immediately was asked to tour with legendary songwriter Van Morrison.
After Van and Greg parted ways, his skill on both electric and acoustic guitar landed him a gig in Hot Tuna, a spin-off from the band Jefferson Airplane. After a year of touring with Tuna, Greg teamed up with guitar hero John Cippolina from Quicksilver Messenger Service. Through John, he befriended Lonnie Turner, the bass player for Steve Miller. Greg and Lonnie co-wrote a song called “Jungle Love” that ended up on Steve Miller’s “Book of Dreams’ album and ended up selling over 15 million units.Greg recorded and toured with Steve for the next four years.
When Steve stopped working, Greg joined the Greg Kihn Band, a popular bay area group. The first tune he recorded with the band, “Jeopardy”, became a number one hit and one of the first MTV smash videos. After 5 years of non-stop touring, the band broke up. Greg worked with a variety of great talents, ranging from bluegrass giant Peter Rowan, Doobie Brother Tom Johnston, Eddie Money, Tom Fogerty of Creedence Clearwater, Big Brother and the Holding Company (Janis Joplin’s original backup band), and the Electric Flag.
In 1994, Greg moved to San Diego and became involved with the Monsters of Classic Rock, an all-star band featuring Mario Cippolina from Huey Lewis’ band, Chris Slade, the drummer from AC/DC, and monster guitarist Rick Derringer. Aside from working with his own band, Greg is in the Six-String Society, a concert series featuring some of the best guitar talent in the world. He works with Deva Premal, the number one mantra music band in the world . Greg also recently completed a CD called “Flight of the Golden Dragon” with Greg Douglass and the Accomplices, where Vintage Guitar Magazine described Greg’s slide guitar work as “…up the with ranks of the very best.”
Two years ago, Greg formed the Pompatus of Love, one of those extraordinary tribute bands that has an important original band member as its leader. They play all the Steve Miller hits and also dig deep into the Miller catalog to play some of his astonishing early material. Greg is a 2016 inductee into the Rock and Roll Hall of Fame and was thanked publicly for his contributions to the band by Miller at the televised awards ceremony in front of millions of people.