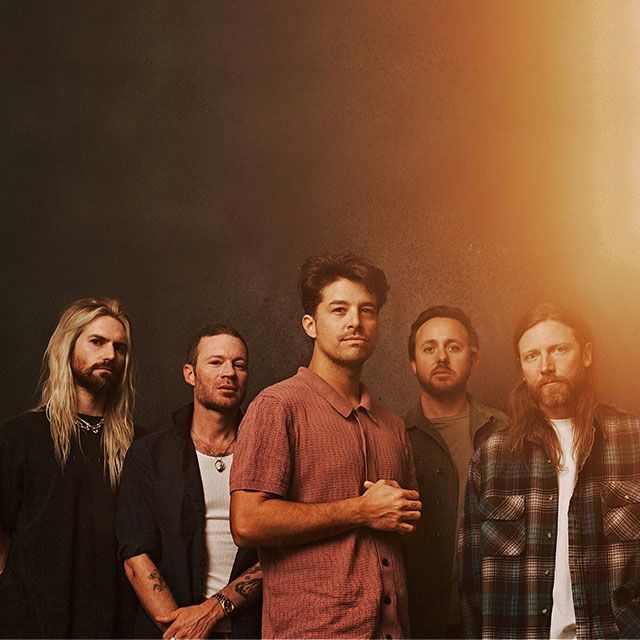 Ticket Price: $25 advanced / $27 day of show / $44 reserved loft seating (available over the phone or in person at out box office)

The whole story could've been written in the stars...

Astrology tells us a "Saturn​ Return" happens when the planet Saturn revolves back to the same position it held upon our birth. It typically takes almost thirty years. However, in the case of Delta Spirit, it took a little less than fifteen. The enduring California rock quintet -- Matthew Logan Vasquez [vocals], Kelly Winrich [multi-instrumentalist, vocals], Will McLaren [guitar], Jon Jameson [bass], and Brandon Young [drums] -- realign on their fifth full-length and first album since 2014, What​ Is There [New West Records]. As much as it reflects their journey thus far, it also ushers them into new territory as both musicians and, most importantly, friends.

"In 2015, we were getting along like family gets along," admits Matthew. "That means sometimes we didn't like each other too much. We were just growing apart. When we took a break and the band stopped, the friendships got an opportunity to come back. That was the process. Every time we hung out, we'd be like, 'It'd​ be cool if we could do it again'​. Over time, you can lose it and even forget it. When we played together, we found the same joy and took it deeper. We all had a 'Saturn​ Return' moment with each other. The record is deep sonically and emotionally. The band is still pursuing its endeavor in a meaningful way."

Delta Spirit started pursuing that endeavor in 2005. The five-piece amassed a catalog beloved by fans, including the I​ Think I've Found It ​EP [2006] and full-length albums Ode To Sunshine ​[2008], History​ From Below ​[2010], Delta​ Spirit ​[2012], and Into​ The Wide [2014]. Praising Into​ The Wide​, Consequence​ of Sound predicted, "Wherever those instincts take them next, they should trust it." Along the way, the group headlined countless shows, toured with everyone from Cold War Kids to My Morning Jacket, and performed at Coachella​ ​, Lollapalooza​ ​, and beyond. Launching a quiet infiltration of the mainstream, they contributed music to many notable TV shows, including their song "Devil Knows You're Dead" being featured in the final montage of the acclaimed series Friday Night Lights​. Along the way, they also became regulars on late night, performing on Letterman,​ Kimmel, ​and Jools Holland​, to name a few, and taping an ACL Live ​episode.

Taking a break, their paths diverged only to continue crisscrossing. Matthew released and toured behind three solo albums, while Kelly launched a career as a producer. Jon hit the road with the LA band, Muna, Brandon accompanied long-friend, Sam Outlaw, in Europe, and Will toured and recorded with Mikky Ekko. After numerous conversations, the musicians convened again at Cave East in Brooklyn for a jam session in 2018. The momentum ramped up as they recorded at Cave West in San Clemente and in Austin, TX before eventually retreating to Sonic Ranch outside of El Paso. The album naturally materialized with the help of engineer Jason Kingsland, who also worked with the band on Into the Wide​.

"Along the way, we made sure to keep those precious moments and maintain a sense of discovery and joy." He goes on, "There are vocals from demo jams, crashes in mic tracks, and all of these imperfect sounds that would only happen once. When we got to Sonic Ranch, it all came together. We've always recorded at destinations, but this one was the best."

Moreover, they wrote and recorded from a new place informed by maturity gained by their journey, break, and reunion. They locked into the process together and eventually found the sweet spot where they were all on the same page.

Delta Spirit introduce this chapter with the first single "How Bout It." A slow burn of drums and piano simmer as Matthew's voice stretches into a fiery falsetto on the question, "How​ bout it?" The track builds towards an airy bridge before a bluesy guitar lead twists and turns through the beat. "It's the trials of a gambler who can't walk away from the table," he explains. "I feel that in my own life. In some way, shape, or form, all of us struggle with when to walk away."

Originally written in an Oslo emergency room on his iPad during a ten-hour wait, album opener "The Pressure" hinges on a sunny guitar lick and buoyant groove before the hypnotic chant, "The pressure got its hooks in you​​."​

"Living in Oslo was great, but I'd been running myself ragged in 2018, and I had a bit of a breakdown there," he admits. "The song talks about that. Always trying to take control and manage my own destiny led to breaking down. It's about being visibly distressed, coming around to find peace, and stepping through it."

Acoustic guitar and shimmering keys glow on "It Ain't Easy" as the verses shuffle towards another hummable hook and a sinewy solo.

"Personality-wise, our band is five contrarians trying to agree on an idea," he continues. "When your similarity is that you're contrarian, it's tough. But, when things work out, it's incredible. So, the song is really about realizing you need friends."

In addition to writing "Lover's Heart," Kelly took over the mic for the first time on a

Delta Spirit album with the heartbreaking ballads "Can You Ever Forgive Me?" and "Just the Same." Meanwhile, the finale and title track "What Is There" hinges on soft acoustic strumming and a poetic homage to the group itself.

"The song is an acrostic, so the first letter of every line in each verse spells out Brandon, Kelly, Will, and Jon," he reveals. "It's a love letter to those guys and what we've done together as a collective. The song looks back and looks forward. We're always chasing the brass ring in terms of our hopes and dreams as a band family. We've done a lot of incredible things, but it's a reminder the journey we're on together is the most beautiful part. We always try to take things as far as we can and live in gratitude amongst that. What more can this band do? Let's find out."

In the end, Delta Spirit not only return, but move forward together on What Is There​.

"When I think about Delta Spirit, we initially met each other in such an odd and serendipitous time," Matthew leaves off. "I'm really proud of our body of work, but especially proud of where everybody has gotten to now. I have a lot of hope for us. I'm grateful for everyone in this band. There's a lot of raw honesty in the music. Hopefully, people can have something to hold on to, so they know somebody is empathizing with their feelings. It's a record for right now, instead of pandering to the past. It's the next step."

need a little palm palm in your life.